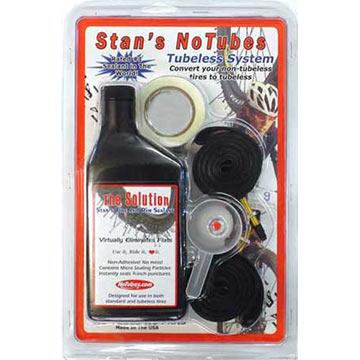 Going tubeless allows you to run low tire pressure for better traction while drastically reducing the chances of a flat. Stan's Standard Tubeless Kit converts standard tubed wheels to tubeless so you can reap the benefits. Everything you need to go tubeless is included. You won't miss dealing with flat tires and you'll save money on tubes!

Until a few years ago, if you had a bicycle, you ran tubes in your tires. Then, along came tubeless tires and wheel sets, claiming to revolutionize mountain biking as we knew it! A pretty bold statement really, but just think... ultra-low pressures, traction galore and, depending on who you talked to, less rolling resistance. Well, as history shows, not all woes were solved and some new ones were created. Yes, lower pressures became a reality and without the fear of pinch flatting, but tubeless tires didn't eliminate all flats. Then where were you? Instead of packing a tube and a patch kit, you now have to pack two tubes, in case of a flat in each tire. Lets not forget cost, tubeless wheel sets, while coming down in price recently, are more than their tubed counterparts. Tires are also expensive, ranging into $50 per tire. Due to these and other reasons, tubeless tire systems are still more of a novelty than anything, even though they have been on the market for a few years.

NoTubes SealantStan’s NoTubes promises to change all that. By using a liquid sealant and a custom rim strip, Stan promises to make almost any rim/tire combination tubeless. When we read about it we thought, wow that is a neat idea. When we saw it at the 2002 Interbike, we knew that we had to try this out! Stan sent us a standard kit comprising two rim strips, one bottle of sealant, a scoop, reinforced spoke tape and an instruction video. After watching the video, I went to mount up the first two tires, a Specialized Enduro Pro, 2.2 inch and a WTB Velociraptor (rear), 2.1 inch. I prepped the rim according to his instructions and used soapy water on the tire bead. After mounting the tire and putting in two scoops of the sealant, which is the consistency of milk, I tried to inflate the tire with a standard floor pump. Nothing doing. I could not get enough volume to seat the bead to the rim. No problem, an air compressor did the trick just fine. Ditto on the Velociraptor. In fact, I never could get a standard tire to seat the first time with a standard pump. Once seated, however, I had no problems inflating and deflating the tire repeatedly. The valve cores of Stan’s rim strip are removable, so there is no need to break the bead to refill the sealant, you can put new sealant in using the supplied tube and an available squeeze bottle.

The first night I lost pressure in one of the tires, but I was able to pump it up again with a normal floor pump. After that, the tires held air better than some tubes I have used! I have checked the air about once a month and added if needed. I am running the tires around 25-28 psi, traction was great and I didn’t suffer any flats at all. Stan claims his sealant will seal up to a 1/4 inch diameter hole, something I have seen demonstrated but haven’t experienced on the trail. I can tell you that it sealed up a tire that was full of smaller holes and it is amazing to see the white bubbles, hear the psssssssss and then it all stops and that hole is sealed for good! I have been using the NoTubes system for five months, and have added sealant once, when I switched tires. If I didn’t want to swap out the tires, I had plenty of sealant left, though I expect it to dry up faster during the hot summer months.

Summary: Stan’s NoTubes is tubeless for the masses. It allows the use of almost any rim/tire combo, even the rims already on your bike and the tires out of the bargain bin. Tubeless tires ride different. There is more traction and they do seem to role faster. The only problem that I experienced was on initial set up. It seems to me that you need to use an air compressor to get the tire inflated initially. So what do you do on the trail when you get a flat? Pull out the rim strip and put a tube in, it’s that easy. Not that I had any flats using the system, mind you.

James Sharp is a contributing editor for GearReview.com specializing in mountain biking.

Stan's Tubeless Kit includes: Two rim strips with valves, one pint of sealant and one roll of universal tape.

What can Stan's really do? Watch this video and see it for yourself.